Our first night in Canada was spent off the side of the road in an apparent trucker campsite. It was rugged and less than beautiful, but we were tired and went straight to bed. After an early rise we decided to drive on until we came to a more scenic location for breakfast and coffee. The drive into the heart of British Columbia was incredibly green, foggy, and damp. Signs along the road warned of avalanche risks in the winter, and the giant tree trunks strewn along like pick-up-sticks on the mountainside were evidence of this incredible force of nature.  We found a small lake, next to which we enjoyed some breakfast and coffee while Zephyr played more Fetch The Stick. We had a nice morning, despite the unwelcome sight of a local fisherman’s, er…., backside as he bent to assemble his gear.

Our first destination in Canada was Jasper National Park. Jasper is located just north of Banff, so we decided to drive up and enter Jasper from the north, and drive all the way down through Banff over the next couple of days. Our first big Canadian shock was the price tag for entering National Parks. We have a US National Park pass, and get into all of the parks for free. Even so, if you pay to enter a US National Park, it’s good for one week. That’s not how they do things in Canada! You have to pay for each day you spend in the park. The cost to enter the park was $19.60 per day, and we bought two days. So we spent almost $40 just to be in the parks, but it doesn’t stop there! We stayed at park campgrounds both nights, and paid for fire permits for both nights. Each night cost us a whopping $36 (wood was included). For travelers on a budget, this was a huge expense. Fortunately the parks were gorgeous so we got over it quickly!

After an early morning shower (squee!), we headed out to Lake Maligne at the northernmost edge of the park. It was nice, but nothing to write home about. The real show stopper was Athabasca Falls, an incredible gushing, tumbling, pummeling, torrent of a waterfall with walking paths that lead right to the top. The waterfall was not huge, but the force of the water rushing over was incredible. The sound and the sight of this phenomenal energy are forever etched into my memory. As if that wasn’t awesome enough, the color of the water was icy blue: an aquamarine that is only found in glacial waters. Top that off with incredible, colorful, striated potholes that were carved out of the cliff side by the water, and you have my tip-top most favorite scenic location to date.

As we drove south into Banff we marveled at the angular, rocky, snow-dusted peaks that surrounded us. Once in Banff we readily decided that Jasper was more impressive. It is larger and more diverse than Banff, and feels less developed. Our campground in Banff was bordered by bear proof electric fencing, and the roadways were also fenced off from wildlife. I do understand the need to protect the animals, but that combined with the number of people, the resorts, and the trains that blared through the night, and we were happy just spending one night there. Oh, and yes, we went to Lake Louise. It is as beautiful as they say, and has that same arctic blue we found throughout the parks, but it was teeming with people, and kayak rentals, and other distractions so we spent very little time there. The town of Banff was cute and quaint, and we enjoyed walking around with the dog and drinking some local coffee.

On the roads throughout Jasper and Banff there were signs posted everywhere about wildlife on the road. Images alternated between caribou, elk, moose, big horned sheep, mountain goats, and bears. These occurred with such frequency that I felt we were guaranteed at least one sighting, if not a collision. No such luck! I was starting to feel downhearted about it all, when as soon as we exited the park we encountered a pile of big horned sheep on the roadside. It was a fitting way to say goodbye to Banff, and on we rode toward Montana.

Zephyr enjoyed our morning stop at a misty lakeside 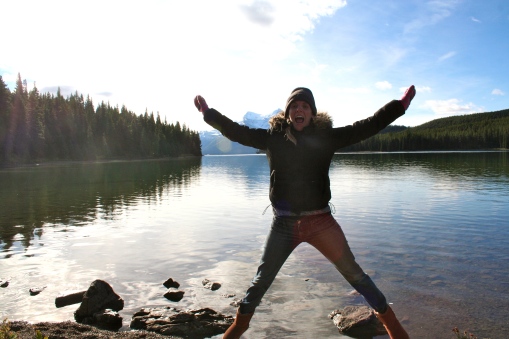 It was cold here too…

I will never forget this color!

Ok, maybe I took too many photos but I can’t get over the beauty of this place!

Canadian National Parks are much more dog-friendly than their US counterparts. For this we (and Zephyr) were grateful! 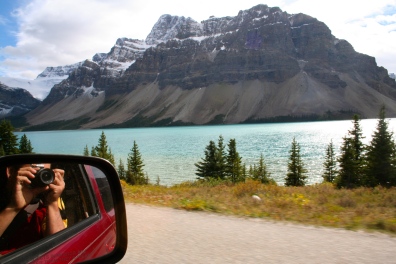 A beautiful lake on our drive south towards Banff

The electric fence that surrounded our campground in Banff

Lake Louise…a rare moment when there were no people in my shot!
Advertisement