Driving across America has allowed me to be privy to some pretty interesting sights, and I’m not just talking scenery. I am sure that if someone from South Dakota went on a road trip to California they would think that all the street names sound foreign, that the speed limit is quaintly low, and that people drive like maniacs. Likewise, driving in states like Montana, Wyoming, and South Dakota causes some culture shock. For example, people do not wear helmets on motorcycles. Ok, that’s not that uncommon, there are lots of states without helmet laws. But how many times have you seen someone on a motorcycle towing a small trailer that housed a miniature horse?  And how many times have you seen someone on a four-wheeler (sans helmet of course) go through a Starbucks drive-through? Also, as a Californian it is in my nature to avoid fast food chains called “Taco John’s.” Andrew, on the other hand, insisted on trying a burrito and he was (unsurprisingly) disappointed. One last oddity: in states like Wyoming and South Dakota corn subsidies are high and corn crops are plentiful. This means that “super” or “premium” gasoline (which has a higher ethanol content) is actually cheaper than regular. And yes, we learned that the hard way.

In Wyoming I had the good fortune of visiting two places that have significance in two of my favorite movies. The first was Sundance, WY, a town from which the Sundance Kid took his name after spending some time in their jail. They had a fun sculpture of him sitting on a jailhouse bench, and I spent several minutes posing with him while Andrew took photos and bemused locals went about their morning commutes. The statue was handsome, but not quite as beautiful as Robert Redford’s version. Not far from Sundance is Devil’s Tower, an amazing geological wonder smack dab in the middle of flat farmland. Like most National Parks and Monuments, dogs are not allowed on the paths, so Andrew took a hike while Zephyr and I soaked up the sun (and in his case, attention). Which leads me to Road Trip Rule #3: If you find yourself bickering a lot with your road mate, take some time apart! Devil’s Tower allowed each of us to recharge and reflect privately. Oh, and while I haven’t had any mashed potatoes since I visited, I think I could do a pretty good reproduction. And if you don’t know what I’m talking about, please go rent Close Encounters of the Third Kind. NOW.

The Black Hills of South Dakota are beautiful, and serve as an important cultural and religious section of land for many Native Americans. While driving through we found a local radio station that was broadcasting a Native American talk show, and listened with interest as we drove to Crazy Horse, a huge monument to this Native American icon that is being carved into the hillside. This monument is a carving in progress, and when complete will be the largest mountain carving in the world. I’m not sure what that really means, as I don’t think there are a plethora of mountain carvings out there. But we paid the $20 entrance fee, and went in to see an informational movie and check out the Native American museum. The project is funded entirely through visitor admissions and donations, and the original artist’s family has taken over the project since his death in 1982.

Apparently the federal government has tried several times to fund the project and the family has refused to accept any help. One consequence of this is that the carving is done in very slow, small increments. At the time we went, the face was complete and we could see the outline of an outstretched arm. I think I will need to revisit the area in another 50 years to see how it’s coming along. A short twenty minute drive outside Crazy Horse we passed Mt Rushmore. In comparison to Crazy Horse, and despite how it looks in movies and photos, Mt. Rushmore is pretty dang small. We didn’t feel compelled to pay for parking so we caught a glimpse from a pullout down the road, and then headed out to Badlands National Park for our next adventure. 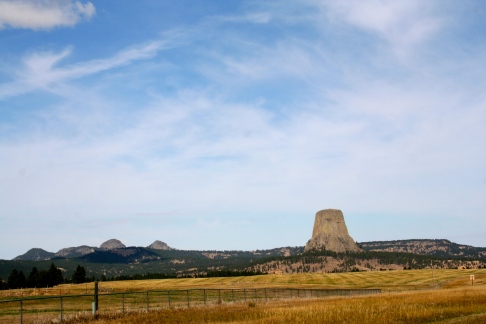 Such a strange and beautiful sight! 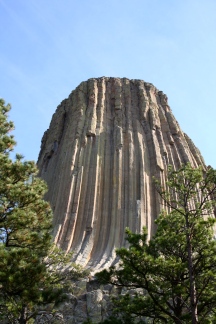 Devil’s Tower is a huge draw for rock climbers, but many Native Americans feel climbing here is disrespectful as this is a highly sacred place. I was happy just to sit and look at it for a while. 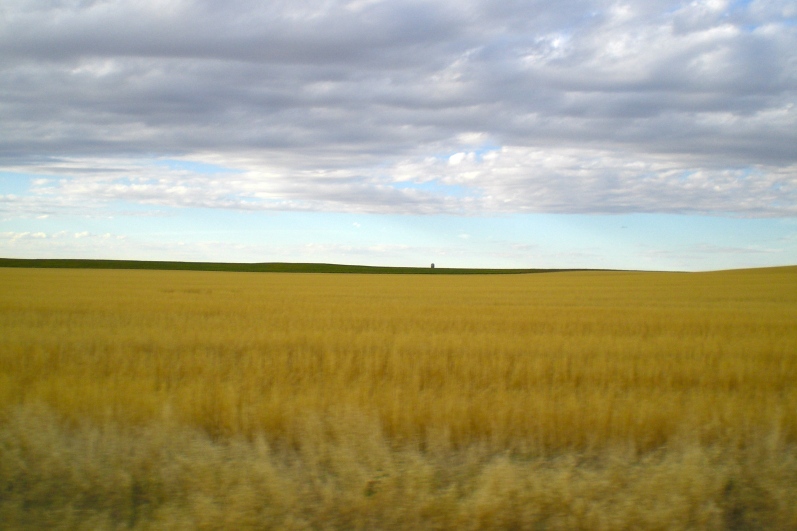 So much open space boggles my little California mind 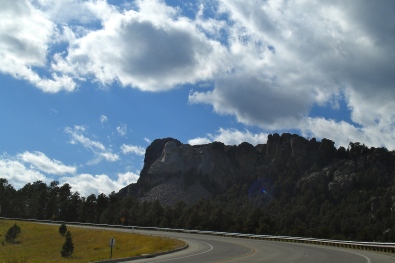 See? Not so massive

What better way to end the day than with a mountain goat sighting? They are the coolest.