You’ll notice two things right away when you enter the state of Maine. One: they love puns. Two: They love lobster. Oftentimes these two loves are combined in the form of clever restaurant names like this gem: Mainely Lobster. I love both puns and lobster, so I immediately felt at home. Our first stop was the seaport city of Portland, where my sister and her new husband Jonathan live. Portland is a beautiful old city with a history of devastating fires. To prevent future catastrophe the city mandated that all new buildings be built of brick or stone, so you can imagine how quaint it is today.

We spent some more family quality time together, enjoying lobster dinner (complete with non-dairy butter for yours truly), sightseeing Portland via the uber-touristy trolley car tour, and more or less chilling out for a few days. I felt that my sister and Jonathan needed some time to decompress after their wedding, so Andrew and I hit the road for a couple of days to see what the rest of Maine and Quebec had to offer.

Our first day was spent driving up north into Canada. This was not our first foray into The Great White North, and so we considered ourselves prepared for the little differences like driving using the metric system. Boy, were we in for a shock! First, our border crossing this time around proved a little more difficult. After some questioning by the Canadian border guard, he made us pull over and sit in the truck for about ten minutes while he took our passports and disappeared inside. I’m not sure what he was looking for, but I guess he figured we were who we said we were, and he let us go through without further probing.

Our second shock was the language barrier. Of course I know that the people of Quebec speak French, but I was assuming signage would be bilingual as it was in British Columbia and Alberta. No such luck! Without any knowledge of French and no local currency, we were at the mercy of the locals who, fortunately for us, tend to speak perfect English. We even had a construction worker practice on us while we waited for our lane to open. He tried to convince us that California was in the opposite direction and that we were going the wrong way. Unfortunately when we arrived at the campground we were hoping to use, there were neither locals nor English signage to be found. The only sign we understood was a picture of a dog with a cross through it, so we turned around and found a dirt road just outside the campground that we used as our bed for the night.

The next day we awoke early and headed into Quebec City. It was a beautiful crisp fall day, and we managed to find some street parking for the truck and teardrop and set off to explore this old fort of a town. I wish I knew more about the history of Quebec, but it was immediately apparent that this town has seen some action. The old part of the city is confined within giant walls way up on the cliff side opposite the Saint Lawrence River. All along the wall are huge cannons, and there are hidden walkways under the fort that must have provided some protection from incoming mortars. Now in peaceful times this is a lovely place to visit, and we enjoyed the European feel of the city, even as we fought for sidewalk space with thousands of mostly American tourists who were pouring in from five cruise ships that had just docked.

There are few things I love more in this world than real French fries, or frites, if you will, and so we settled down for brunch at a sidewalk café that served a delicious steak frites. Unhappily for me dairy-free options haven’t caught on in Quebec, so I had to forgo my typical café au lait with soymilk for a regular cup-o-joe (with plenty of sugar of course!). As we were heading back to the truck we passed a bike store and found some handlebar grips for Gertie that match my leather saddle. With the addition of these Québécois handlebar grips and a bell my pal Tom bought me in NYC, she is becoming quite the multicultural bicycle!

On our way back into the US we were once again stopped at the border. This time they made us get out of our truck and wait inside while they “searched” our vehicle. I watched from the window as the agent fumbled with Andrew’s keys, apparently unable to open the trailer door. After a few minutes he gave up and we were free to go. I had nothing to hide, but I am pretty glad that he wasn’t privy to our poor housekeeping; we aren’t in the habit of making our bed look nice when we hit the road!

We stopped for the night at Moosehead Lake where we enjoyed a nice fire and dinner before rain caught us. We spent the next day exploring Acadia National Park on the coast, and while we thought it beautiful, most of the views were foggy and grey. After driving all day in the rain, we learned that the teardrop has some leaks, and Andrew devised a clever way to dry out our futon mattress over a campfire using ropes and hiking poles. I like to think those hiking poles were glad to finally be of some use!

The next day we drove back down the coast and met Meghan and Jonathan at a local Oyster Festival. I don’t know if I can do this downhome festival justice by attempting to describe it. The oysters were delicious, the music was fun, and the people were drunk. The rain was relentless, but this just pushed everyone closer together under the tents and increased the merriment. The oyster shucking competition was fierce: so fierce I couldn’t see a lick of action from my 5’2” vantage point. Even Andrew at 6’2” struggled to see what was going on. I do know the winner was a young man from Colorado who was wearing a bowtie, and his reward was a belt buckle. Yes, Mainers sure do know how to have a good time!

Our last day was spent in Portland using the Laundromat, changing the oil in the truck, and generally taking care of business. The sun reappeared, we started to dry out, and we enjoyed more lobster before saying au revoir to Meghan, Jonathon, and this wonderful northern state they call home. 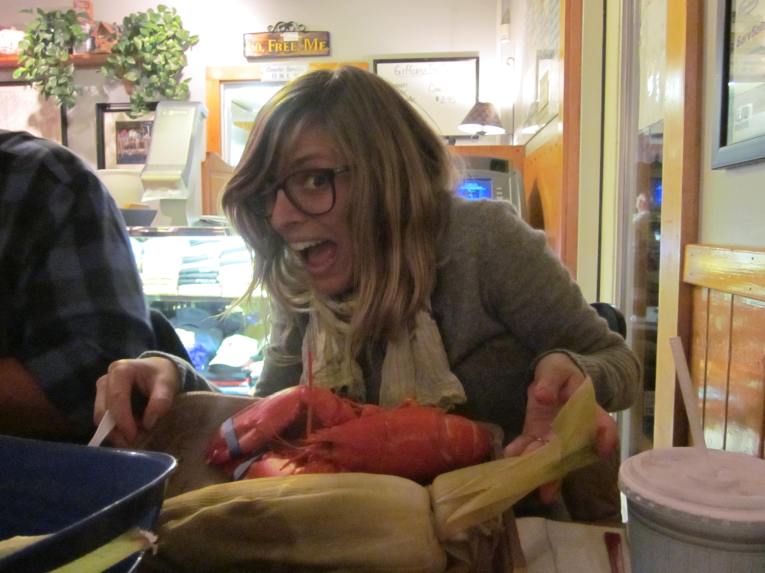 Maine is serious about its ice cream. So is Andrew. 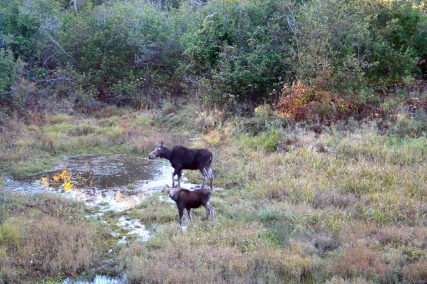 We spotted this mom and calf on our way into Quebec

I still have no idea what this is saying 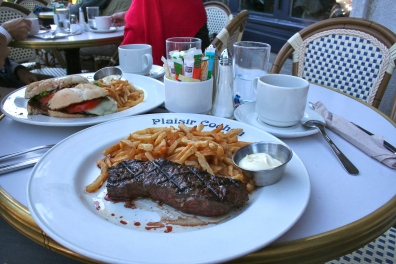 It was as good as it looks 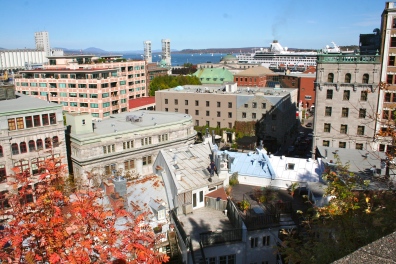 A view of Quebec City, complete with one of the cruise ships

Some fancy building in Quebec City 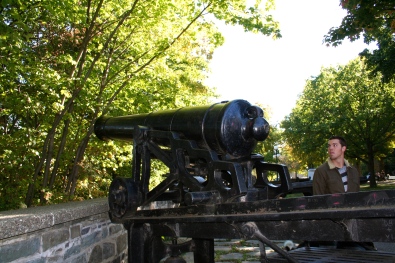 There were lots of cannons throughout the city

Hanging out at an overlook in Quebec City 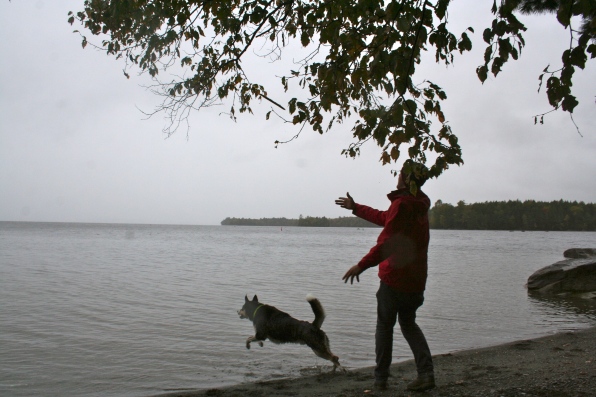 Some beautiful (and wet) rocks in Acadia National Park

Our first attempt at drying out the futon, before Andrew employed the hiking poles