When we were in Maine we asked Jonathan for some wilderness recommendations in the New Jersey area and he recommended the Pine Barrens, which is smack dab in the middle of the state. This one million acre “forest” is like no other forest I’ve ever seen. It is full of beautiful pine and oak trees to be sure, but instead of regular ol’ dirt the ground is actually comprised of beachy, soft, wonderful sand! We paid for a campsite, dropped off the trailer, and then hit the trail for some good old-fashioned off-roading fun in the pickup truck.

We had a grand time bouncing, sliding, spinning, and muddying up the truck, and as we careened through the trees I could hear Gertie’s bell occasionally dinging joyfully overhead. I imagined she was enjoying the ride; glad to see something other than the pavement to which she had become accustomed. I still maintain this is the case, despite learning that her handlebars had been twerked 90 degrees from their normal resting place after getting snagged on a branch! Poor Gertie. I wish I could say this easily fixable setback was the worst of her troubles, but she was to experience an even greater misadventure on the Blue Ridge Parkway. Don’t fret dear reader, you’ll just have to wait and see how that turns out in a future post!

The warm evening was spent in a nearly empty, peaceful campground with a chorus of cicadas, frogs, owls, and geese to lull us into a glorious stupor next to the campfire. We lolled about lazily enjoying the peace, only stirring for a quick makeshift bucket shower under a nearby tree. Everyone should experience such a night at least once a month. Go try it!

The next day we were off again, back into the “civilized” world of Washington, D.C. There we met up with my cousin Mel and her boyfriend Aidan, and we decided to go out for a delicious dinner of overpriced ribs. As we sat at the restaurant on Capitol Hill awaiting our meal, my phone rang. I didn’t recognize the number, so to be silly I asked Aidan to answer it. Thank goodness he did! I saw his face drop and heard the familiar “…a black dog? Yeah…he’s ours…” before he took down directions to the caller’s house. Apparently Zephyr, whom we left “safe and sound” back in the truck, managed to bend the wire grate about eight inches away from the window, bust the screen, and squeeze out into the D.C. streets. He was chased by some girls about eight city blocks before someone finally caught him and tied him up in their backyard. Yes, this dog is going to be the death of me.

Andrew and Aidan set off to reclaim Zephyr (although I tried to talk them out of it), and the rest of the night was spent in the confines of Mel and Aidan’s apartment where we chatted, drank wine, and were treated to Aidan’s wonderful ukulele rendition of America the Beautiful. The next morning we met up with our old San Diego buddies Douglas and Rose, and had a delicious breakfast before setting off to do some sight seeing around D.C. We spent the better part of the afternoon hoofing it to various monuments and significant structures before setting off and leaving our nation’s capitol in the (capable?) hands of our elected officials.

Sand is fun for driving!

Gertie got her bell rung!

Sunset at the Pine Barrens

Here’s hoping they’re hard at work in there! 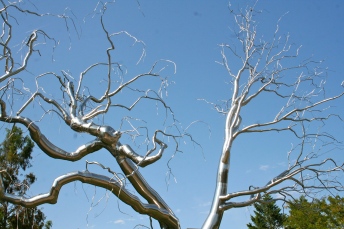 Zephyr the tree-climbing, truck-escaping, Houdini of a dog
Advertisement