It’s a difficult endeavor to write an interesting blog people will want to read when you spend the majority of your time sitting in the hospital, playing Words with Friends on your iPhone. “Earlier today I played “peyote” for 54 points! My life is so exciting, aren’t you jealous?!” In truth, it has been an arduous few weeks since I returned to Tucson. My poor grandmother has experienced one setback after another, and her doctors finally decided she needed to have her entire pacemaker replaced in order to remove any potential hiding places for the mystery bacteria that has been marauding in her blood stream. Fortunately her pacemaker removal and the subsequent replacement all went well, and Grams is recuperating nicely.

One happy side effect of potentially serious surgeries is that my dad and uncle Ed flew out from Sacramento and New York, respectively. Although the majority of the week they were here was also spent in the hospital reading, chatting, and playing more Words with Friends, we also managed to have ourselves a little fun. Ed and I went to the movies, Dad and I went to the gun range and cigar store (I guess I’m like the second son he never had?), and all of us spent a couple hours in the casino. We wined and dined all over town, but our favorite restaurant of the week was Lil Abner’s, an ancient, divey steakhouse out in the boonies. The walls were covered in scrawled autographs (evidence of over 60 years of business), the food was presented with nary a garnish, a giant bowl of soupy beans was plopped down to be shared, and…the food was absolutely spectacular. Who needs ambience when the ribs are so tender the meat simply melts right off the bone?

Another added bonus occurred when the two of them staged an intervention. I had been driving my truck around with a worn out clutch (a 15,000 mile road trip will do that), and was now accustomed to the occasional gear slip. I also had developed a great technique for hooking my toe under the sticky clutch pedal and pulling it back up so that I could shift again. I even managed this right after a pedicure without smudging my newly painted toenails! Dad and Ed were less than impressed with my skills and demanded I take the truck in to be serviced. After a day in the shop I drove off with a new clutch, and now that I have readjusted to what is normal I can see that it was a good idea. Fathers know best!

One of the stops on our way from the hospital was to the cemetery, where my grandfather is buried. He passed away four years ago, and I don’t often go visit his gravesite. I have a hard time appreciating cemeteries; I find them to be a tremendous waste of space and water, especially out in the desert. When I go I don’t feel like my grandfather is there, but it was nice to see his tombstone and it made my grandma happy that we went. The flowers, visits, silk-lined caskets, elaborate ceremonies and such that we afford the dead are really placations for the living. Throw me in the ground in an unfinished pine box and plant a gnarly willow on top! Or better yet, pass on the formaldehyde! Cremate me and spread some of my ashes under a tree, some on top of a mountain, and the rest into the ocean. The first law of thermodynamics states that energy is never created or destroyed, but merely transferred between systems. And so we go. Ashes to ashes, dust to dust. Many of my readers may disagree with me philosophically or theologically on what happens after death, but I personally take comfort in the thought that after I have churned away the years in my little fireball of life, the world around me will absorb that energy and propel it into new creatures, ad infinitum.

While I am not a mystical person, I do sometimes find meanings and signs in the commonplace.  While we were standing over Gramp’s grave, two sprightly, dusty, gorgeous coyotes appeared in front of us. They frolicked together, groomed themselves, and seemed right at home in the cemetery. I immediately thought of how perfect the coyote is as a “spirit animal” for my grandfather. In many Native American traditions the coyote is a perpetual trickster, which definitely suits my grandpa whose favorite pastime was to slap you on the butt if you made the mistake of bending over in his vicinity.

Although it is still January, changes are coming and it feels like spring is in the air. The temperature in Tucson is rising back to normal after a few weeks of frigid desert nights in the 20s, and when I step outside into the sun I feel a warmth that stretches its energizing fingers down into my tired bones and restless soul.  Andrew and I have a few potential farm job/apprenticeship options brewing up in Washington, and while I don’t want to jinx them by detailing them here, I feel good about the coming spring. It is going to be a time for renewal, and a time for us to rediscover our newlywed bliss. I wish the spring was already here, but there’s nothing for it but to hurry up and wait! 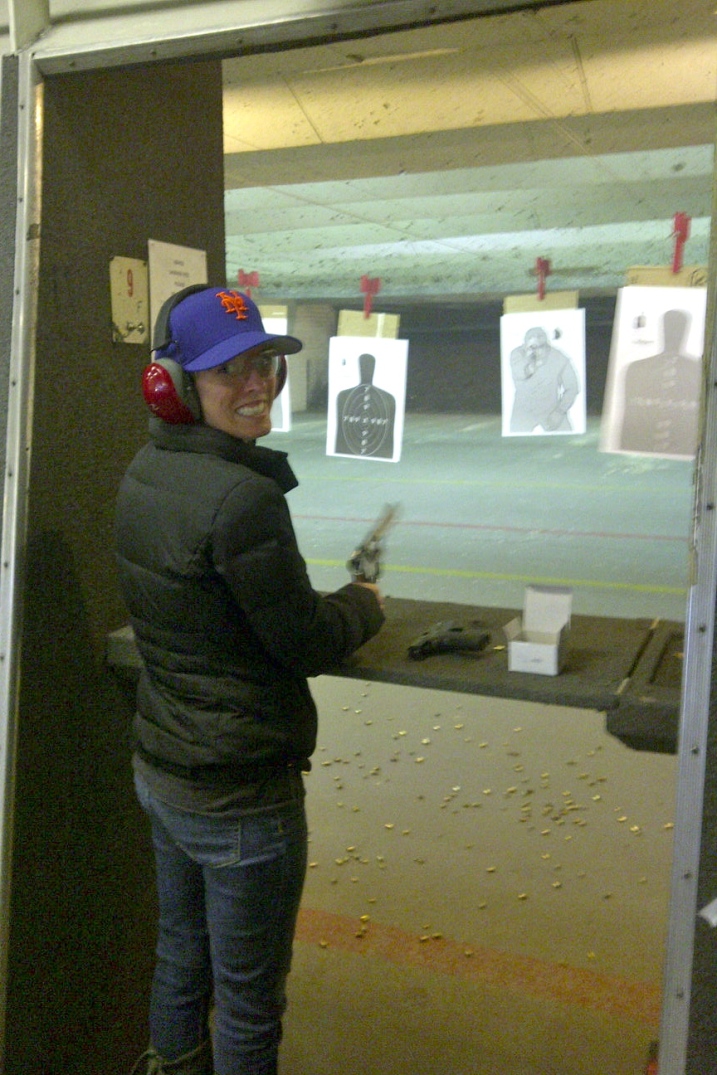 I realize posting a photo of me with a gun has potential implications. I do not own any guns. I do not know where I stand exactly on the gun control issues at hand. What I do know is that I enjoy shooting them for sport, and I’m a pretty darn good shot!

Grams is staying at University Medical Center, and we walked to lunch near campus the other day.

The desert is full of life! (photo cred: Ed Pino)

My dad referred to these as “The Clothespins”. They are blue on one side and red on the other…Wildcat colors. “Bear Down!”

2 thoughts on “Hurry Up and Wait!”