In North Carolina we exited the Blue Ridge Parkway and headed into the northeast corner of Tennessee on our way to Great Smokey Mountain National Park. We found an empty campground overlooking a large lake, and set up in a site with excellent views and gusty winds. The first night was peaceful until about 10 PM, when a large family rolled in and set up in a site right next to ours, despite the abundance of available sites all around the campground. They proceeded to make a bunch of noise and I even had to yell at one of the kids who was rudely shining his flashlight right into our trailer! I spent the night grumpily fuming while they tromped around, but fortunately the next morning they packed up and headed out as quickly as they had arrived, and we were back to enjoying the peaceful serenity of Lake Watauga.

The waters of Lake Watauga are warm enough for a quick exhilarating dip, and so we enjoyed jumping into the water and lounging in the sun while boaters and fishermen buzzed by in their motorboats. The campground was only $6 a night (showers included) so we decided to stay another night, thankfully without any further annoyances.

The next day we drove down into the Great Smokey Mountains.  Gatlinburg, the town just outside the National Park, is a crazy hodgepodge of touristy nonsense. It was crawling with people who were window-shopping among the hundreds of shops, and included popular destinations like Ripley’s Believe it or Not Museum, Hidden Caverns, and a Jellystone Campground. Needless to say this wasn’t our cup of tea, so we did our best to get through the town without hitting any pedestrians as they darted across the street.

The park itself wasn’t much better in terms of crowds. In fact, Great Smokey National Park has the most visitors per year out of all of the National Parks. One of the reasons is that park entrance is free, a rarity in the National Park system. We drove through the park in a long line of cars, and stopped at a historic pioneer homestead, where we were able to see how farmers in Appalachia lived in the 1800s. Andrew was interested in the old tools, techniques, and blacksmithing forge, but I was mostly excited to hang out and take photos of the gregarious pigs.

On our way out of the park we passed through part of a Cherokee Indian Reservation. This side of the park was no less touristy, although it was more reminiscent of a bygone era with business names and images that reinforce old stereotypes like “Wigwam Motel” and “Little Princess Ice Cream.” We also saw a man dressed in traditional Cherokee garb performing for some tourists. It’s an odd thing really. In a way it seems like it could be demeaning, and I’m sure many of the tourists only see the reservation as a source of entertainment. On the other hand, this is how the people who live there are supporting themselves among limited opportunity. Now I wish I had spent some time talking to a few of the Cherokee to hear their own opinions on the matter.

That afternoon we stopped in a crowded campground on the southern edge of the park, and as we started setting up camp a nice fellow named Sid came over to look at the trailer. The trailer is often an opening to conversation wherever we go, and so we are normally prepared to tell people all about it. A few times people have asked us how much it cost. This strikes us as a bit forward, but we usually oblige because people are generally just curious having never seen one for sale. In this case it turned out to be Sid’s opening question. Apparently all Sid really needed was a reason to talk, and talk he did! He even made himself comfortable at our picnic table, straddling the bench as we hovered around not sure what to do with ourselves. We discovered that Sid is on disability, and travels around the country going to Chick-Fil-A openings so that he can get free vouchers for their food. We also found out his relationships with his mom and sister aren’t so great, he has medical issues, and that a natural gas company is ruining his life by drilling near his house. It was hard to get a word in edgewise, but at one point I managed to make it clear that we needed to get dinner going, so he left momentarily before he returned with maps of the area for us.

Sid stopped by several times throughout the evening, and it was apparent that he was really lonely and a bit socially awkward, but a really nice guy overall. Our camp neighbors made beef stew for dinner and told us they had extra, so we brought Sid a bowl because it seemed like he didn’t have a lot in the way of food or money. The next morning Sid returned and gifted us some cheese and peanut butter crackers and a small packet of guacamole in thanks. As we drove down into Georgia that afternoon we stopped at Chick-Fil-A in honor of Sid, his ambitious endeavors, and his adventurous spirit. May he continue to earn free chicken vouchers all the rest of his days.

A view of the sunset from our campsite on Lake Watauga

Another shot of this serene lake 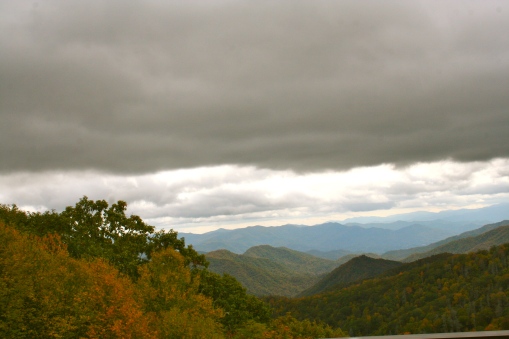 A pastoral scene from the historic homestead museum

I want one. Or seven.

Here Andrew climbs illicitly into the exhibit to pump the bellows. What a rebel.

We got a little lost but discovered this fun, bouncy walking bridge along the way

One thought on “Tennessee Sid”