Sometimes, despite our best efforts, we must rely on commercial society to get things done on our trip. We do what we can to stay off the beaten path, preferably driving along small scenic roads, staying in National Forests with no real campgrounds to speak of, and generally enjoying a bit of isolation. On the other end of the spectrum we like exploring the big cities and urban areas we come across for a bit of culture. But as we rolled into northern Georgia we realized we needed to visit a few stores (REI for Andrew, Sprint for Micha) so we headed to a suburb north of Atlanta to visit the strip malls. Andrew dropped me off at the Sprint store so he could head over to REI, and I finally upgraded to an iPhone (hallelujah!). As I sat outside the store waiting for Andrew to come pick me up, I fiddled with the phone and was trying to figure things out when a motorcycle cop approached.

“Ooooh, you got an iPhone! I love mine. Here let me show you. Oh hey, you know I have a charger on my bike. You can use it if you want while I’m inside. Just don’t steal my ride, hahaha. Also don’t steal my lunch. It’s homemade chicken soup, I made it from scratch.” He was a very nice southern gentleman, but to this day I still don’t know if he was just being friendly or if he was trying to flirt. Either way I was glad he didn’t come over to issue me a ticket for loitering!

This detour into suburban Georgia wasn’t just for shopping, fortunately. Some of my cousins live in the area and so we were lucky enough to be able to visit with them. They live in a beautiful home and were very generous, cooking us a delicious dinner and letting us do laundry, shower, and sleep in an extra bedroom. I tried to accuse them of showing real “Southern hospitality” but they quickly corrected me. As New York transplants they announced, “This is Northern hospitality in the South.” I stand corrected! Either way, it was a very nice visit and I am thankful for any variety of hospitality I am shown on this trip!

The next day we headed down to Savannah, a city I was very excited to explore. We got into town late, so we headed directly to a state park on the outskirts of the city. This park was covered in gorgeous oak trees that were dripping in Spanish moss, a true Southern sight to behold. We had a nice quiet evening and awoke early the next morning to check out a three mile nature trail in the park. We decided to take our bicycles, which are city bikes not really well suited to sandy trails covered in tree roots. But we did our best and had a great time with Zephyr who ran along side us, stopping to take an occasional dip in the disgusting muddy swamp water. This nature trail was very informative, and within three short miles many interesting sights were crammed in. First up were the “gator holes” which were sadly empty of any visible gators. Then we went to an old fire tower, passed by an ancient shell midden where pre-Columbian Native Americans discarded their shells, rode over an old earthwork mound that was built by the Confederate Army during the Civil War, and finally passed by a rusted liquor still from the prohibition era.

After our morning jaunt we headed into Savannah ready for some city sights. We walked throughout the historic downtown area, which is set up in squares around very old city parks. These parks are full of monuments, statues, and informative plaques covering the history of Savannah. We walked around for hours, checking out various shops and the beautiful waterfront. For dinner we stopped into a restaurant called Mellow Mushroom Pizza, where we felt right at home among the dreadlocked and patchouli wearing clientele. Well, Andrew felt right at home anyway. There is still a small part of me that resists the inevitable hippiness that comes with this type of travel. I indulged in some gluten and dairy-free pizza and beer, and we finally returned to the campsite exhausted from a long day of Savannah fun.

I knew I was really in the South when I saw the trees covered in gorgeous Spanish Moss! A pamphlet from the state park said they used to stuff it into mattresses, and since there were often chiggers hiding within it it lead to the phrase “sleep tight, don’t let the bedbugs bite!”

Is this why they named it Savannah? Sadly we failed to find any giraffes (or gators for that matter). 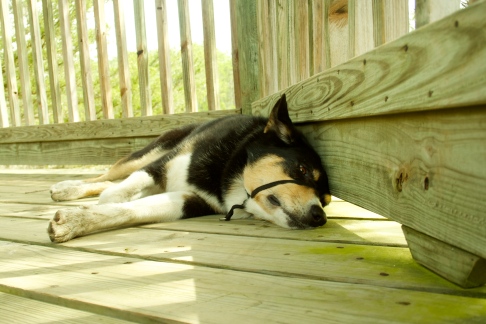 All tuckered out from his morning jog

Andrew reads about the shell midden on our nature ride

Gertie looks so pretty in the wilderness of Savannah!

The architecture in Savannah was awesome

The dome of the capitol building in Savannah is covered in 24 karat gold leaf. Of course Andrew wanted to figure out a way to climb the dome and take some, since he is certain the Fiat money system will soon collapse…

A neat display outside of an antique shop