Hot Springs National Park is the strangest National Park we have yet to visit. The town of Hot Springs, Arkansas sprang up in the 1800s because of the natural hot mineral water that flowed into a nearby river, and people would come to sit in the river for recreation. Eventually it was determined, (through what kind of testing I have no idea), that these waters were beneficial to health, and so a city was built with various bath houses that captured the natural hot spring water and diverted it into tubs. Doctors would prescribe their patients trips to Hot Springs to cure their ails, and for the first half of the twentieth century business was booming. The National Park was created in order to preserve the history and healing properties of the area, although really the “park” is actually just the town itself.

Unfortunately, (or fortunately, depending on how you look at it), modern medicine was born and with it came miracle drugs like penicillin. People no longer needed to travel to Hot Springs to get well, and the area began a steady decline that is still apparent today. Out of the many historical bathhouses in the town, only one is still in operation in the same fashion as it was 100 years ago. Another has turned into a more modern spa, and the rest of the buildings are being retrofitted and leased into various businesses, including a brewery that is slated to open in the near future.

In light of this decline, it is easy to see why locals are now investing their time and energy into typical tourist traps like the Mafia Museum, along with kitschy shops and mediocre restaurants. They need to do what they can to stay afloat, and if people no longer want to pay for the healing waters, maybe they will pay to learn about Al Capone’s trips to the area. That said, we decided we did want to pay for the waters, and so we checked into a hotel that allowed dogs and had the hot spring water piped into the bathroom. The hotel was a shell of its former glory days from the 1920s, but we still enjoyed the live music in the lobby, the decent restaurant, and the various fountains and spigots that dispensed delicious untreated mineral water.

Exploring the town we discovered that there are fountains everywhere that pump out hot springs water, and several faucets that the public can use to fill up their water jugs. We took advantage of this and now, (over a week later), are still conserving the last of our delicious, magical mineral drinking water. The National Park visitor center was under renovation, so we visited the temporary location which was placed inside the gift shop. It was pretty depressing to see the rangers in their uniforms hawking bathrobes and sea salt soaks, but Hot Springs is an important cultural site and I am grateful the National Park exists here. Because of the National Park designation the old bathhouses must be maintained or refurbished in their original style, so the unique history of this city will forever be preserved, at least on some level.

After a peaceful night enjoying the luxury of the mineral bath, a king sized bed, and bad television we hit the road into Oklahoma. We found a state park alongside a lake, and as we drove up we were greeted by the park ranger. This man was a sight to behold. He was missing a few fingers, and even more teeth, and smoked so many cigarettes that his plastic lighter was attached to his pants via an elastic leash. Looks aside he was quite friendly, and even had us follow him to the best campsite in the park. We were the only campers that night, and Zephyr enjoyed the freedom to run about untethered and swim in the lake.

The next morning we awoke early to frost, and a thick fog was resting on the lake. We had a quick breakfast and with chattering teeth we drove the next few hours into Oklahoma City. I needed a spot to post my blog, (lucky you!), and so we stopped at Elemental Coffee, a hip, industrial-style coffee house with hand pour overs and delicious coffee. Again, as I discovered in Chicago, I know the coffee is good if I don’t need to add a bunch of flavored sweetener! In this case our barista (or baristo?) was a nice young man from Escondido, a town in San Diego County not far from our last home. I asked what on earth brought him to Oklahoma City, and he replied, “I dunno. I just wanted something different.” Obviously someone like me cannot argue with logic so sound. I tip my hat to this fellow adventure seeker. Knowing that there are so many of us out there makes me all warm and fuzzy inside. 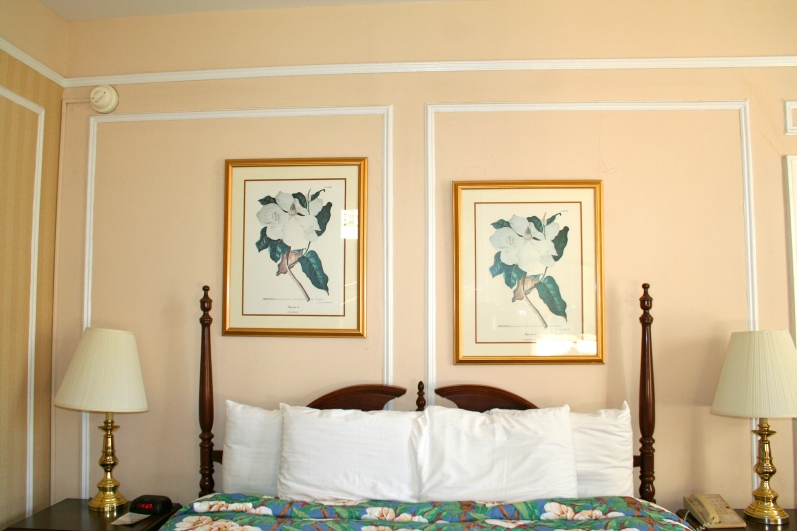 If any of my fellow design students are reading this blog, you will understand my dilemma here. I was able to straighten the frames, but Andrew wouldn’t let me rehang them or move the bed an inch and a half to the left. I had a hard time sleeping…

I even brought out the lipstick for this one!

See? I told you it’s a National Park! 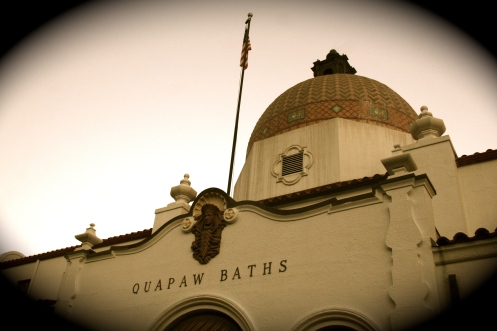 One of the historic bath houses from the 1930s. The original buildings from the late 1800s and early 1900s were made of wood, and as such they were laden with bacteria and suffered from rot. In the 1920s or 1930s they were all torn down and rebuilt out of stone. 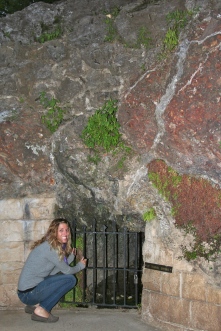 This random hot spring flows through a cave in the middle of town.

While I luxuriated in a hot springs shower, Andrew took Zephyr for a walk on a nice nature trail that was accessible from our hotel.

I’m not sure which alcoholic beverages would qualify…maybe Bud Light? Sorry Oklahoma…we broke one of your rules. 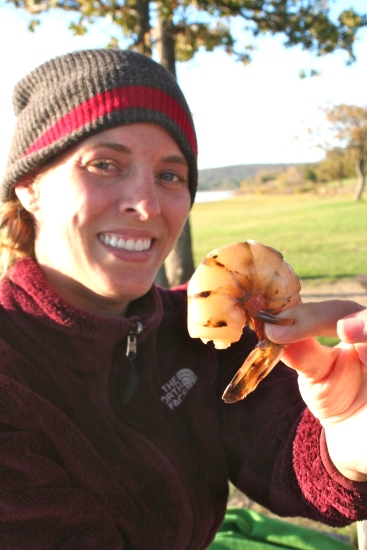 We bought giant Louisiana-caught shrimp, and they were delicious!

I know in my “About Us” section I talk about eating rice and beans, but really with Andrew cooking even rice and beans would be fabulous. This stir fry was spectacular (and beautiful)!

Zephyr and I got a few extra rounds of “Fetch the Stick” in before the sun set.

One thought on “I Feel Better Already!”