I’m sitting in the passenger seat of the pickup, outside my favorite taco shop in San Diego. “San Diego!?” you say. “You’re still in Arizona!” Okay, I admit I have fallen hopelessly behind on blogging about my adventures, and for this I apologize. I know many of you (okay, maybe just you Jane!) are sitting glued to your monitors wondering where in the world the Ides are now.

After departing the Grand Canyon we headed down south towards my native city of Tucson to visit my grandmother, who at 88 years old is just starting to experience some health issues. Once we were on our way to Tucson we started to get the sad feeling that our trip was coming to an end. We saw more and more California license plates on the road and realized our teardrop traveling days were dwindling. We tried to keep our spirits up with diversions. We stopped in Sedona for lunch, and we went into every single jewelry store in town so Andrew could find the perfect silver wedding band before he finally settled on a very cool Hopi design. We braved the snow flurries on the crazy mountain pass outside Jerome, and then hunkered down for a freezing night spent in a campground near Prescott. Despite the bitter cold we were not alone, and made a point of camping as far from possible from the group of young men rocking out heavy metal while huddling around a large bonfire.

Sadly, this was to be our last night in the teardrop. We spent our first night in Tucson with Jane, an old family friend who lives out in the desert in an area so remote that she came out to meet us on her four-wheeler as we were driving up. We had a lovely time visiting Jane and her husband Don, while also mooching free laundry and dinner. We have become quite adept at taking advantage of people’s generosity, and fortunately so far people seem to actually enjoy helping us. I am grateful for all of the help and hospitality we have received along our journey. I wonder how long we can keep up this charade…I really think I could have a future in hobodom!

The next few nights were spent at my grandmother’s house, and we visited her every day in the rehab facility where she is being treated for a mysterious infection. While in Tucson we distracted ourselves by having a drink with Chaz, an old high school buddy of mine who happened to be in town. He showed up in his Navy khakis (he is an officer), and talked about his plans for nursing school. Yet another example of one of my peers having achieved so much already and having responsible plans for the future. Who are these people?!?

Most of our time in Tucson was low-key, so we had plenty of time to think about our options and fret about our own future. We figured we were all set to move in with Andrew’s parents for the winter, but we were beat to the punch by his sister, her husband, toddler, and their two dogs. Andrew’s family is very generous and accommodating and still welcomed us to come, but having six adults, a toddler, and three dogs in one house was starting to sound like “crazytown” to this girl, who is used to being alone in the woods with her little family. Additionally, as I spent more time with my grandmother I realized that, while she has a wonderful network of friends in Tucson, there is no family nearby to take care of the day-to-day tasks that she needs assistance with. She had been in the rehab facility for five days before we got there, and still only had the clothes she was wearing when she arrived. I started thinking maybe I could be of use to her this winter, so Andrew and I began grappling with the idea of parting ways for a few months.

After lolling around Tucson for a few days we said goodbye to Grandma and headed back into San Diego for a few days before the exciting Mexican leg of our adventure; the grand finale if you will. Returning to your hometown without actually having a home there is tough. You feel like you’re home, and you start spending money on all of your favorite restaurants and such, but you don’t have a routine, and you don’t have a place to settle. You also don’t have a job, so the whole spending money bit is treacherous! After floating around San Diego for a few days we dropped Zephyr off at Sunnybrook Farms, an awesome dog-boarding farm that lets the dogs run around in a pack and play all day. It was bittersweet to say goodbye. Zephyr has grown on me, despite (or maybe thanks to) his crazy antics, but it was nice knowing he was going to have a grand time with some canine pals.

Our Thanksgiving trip to Baja, Mexico was planned months and months ago, much to the dismay of my father who usually hosts Thanksgiving. Fortunately Dad was generous enough to give me his blessing. I love family and I love Dad’s turkey…but when life asks you “Sacramento…or Mexico?” you’d better say Mexico! Our friends Danny and Katie travel to Baja frequently, and Danny’s family owns a house near the town of Mulege which is about 12 hours south on the Sea of Cortez. After a few days in San Diego the four of us crammed into Katie’s (mostly) reliable sedan, along with oodles of fishing gear, spear guns, snorkeling equipment, coolers, and a wakeboard, and left San Diego at 0’ dark-thirty in the morning. 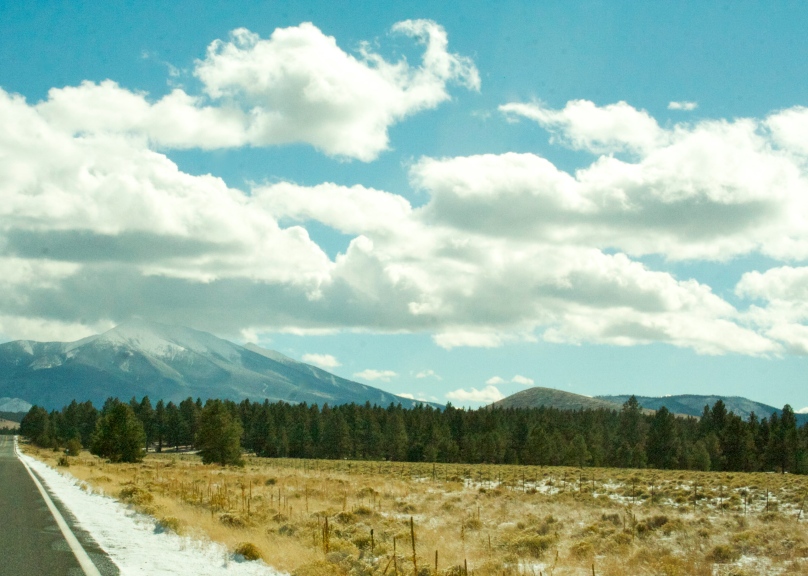 A lovely view of a snowy mountain peak in northern Arizona

The red rocks outside Sedona are beautiful, although compared to the awe of Utah they’re nothing to write home about!

I was white-knuckling the steering wheel while driving in the snow over the mountains when I suddenly realized I needed to relieve myself! There was nothing for it but to squat behind the truck and hope no one saw. Andrew made a point of capturing my pee dance.

Here is Jane, leading the way on her four-wheeler. What a badass!

One thought on “A Homeless Homecoming”